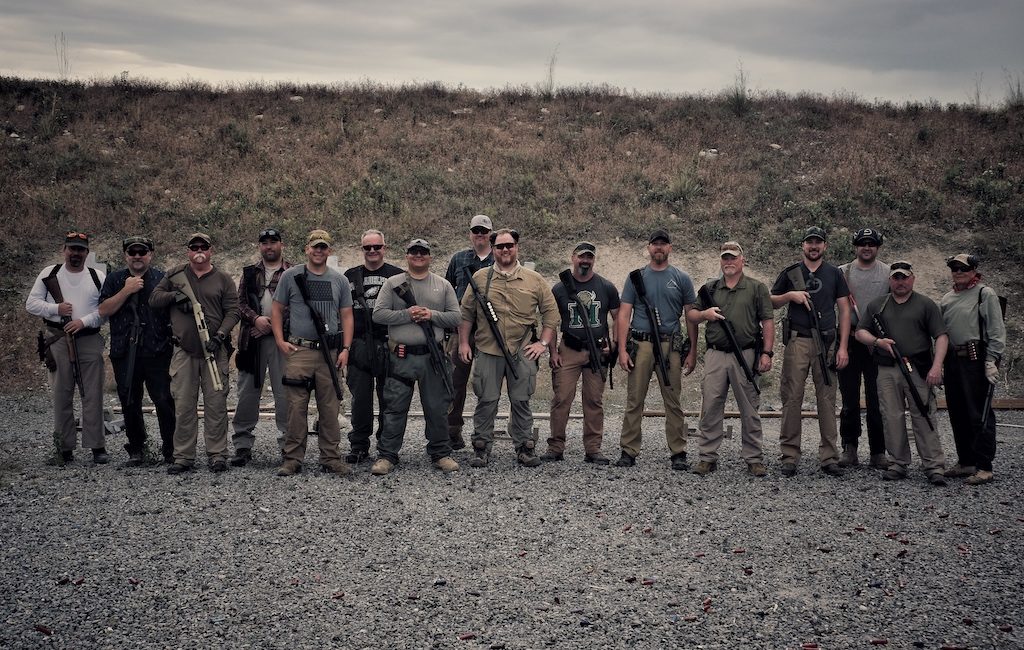 As far back as anyone can remember, the shotgun has served Americans in almost all areas of our lives. It has fed our families, patrolled our streets, defended our homes and fought our wars for generations. Today, in spite of inroads and advances in rifles, tasers and other more advanced weaponry, the pump action shotgun remains one of the most common weapons in law enforcement and home defense.

For reference, my personal experience with shotguns before this course was limited to shooting random things in the desert, trap and skeet (20 or so times) and bird hunting (1 time).

Students traveled from all over Utah, Idaho, Nevada, Wyoming and California to attend. Several students provided written feedback, some of which is featured in this AAR (after action review / report), below. Although the course is “pump-centric”, all reputable makes and models are welcomed and encouraged. Students completed this course with the following base models (I may be missing 1 or 2):

“I was anxious to take this course because I appreciate the power as well as the limitations of the shotgun platform, and wanted to improve my operational skills and learn those limitations.”

Shotgun Operator is an intensive two day program that is designed to provide the student with the fundamental gun handling skills to utilize the modern duty shotgun in an efficient and effective manner. Focusing on manipulation skills that maximize the shotgun’s tactical performance, and advanced level shooting drills that enable the student to use this vital tool throughout its range of capabilities, Shotgun Operator is designed to give the end user a complete system of shotgun manipulation skills during the two day course of instruction.

The 12 gauge pump shotgun is one of the most powerful CQB weapons available in the small arms arsenal, yet it is one of the least understood. This course primarily focuses on the Push/Pull method of recoil control, as developed and taught by shotgun master instructor, Rob Haught. Using his unique method of recoil management, the student will be able to reduce felt recoil by nearly 50% and be able to fire follow up shots with a 12 gauge pump shotgun as fast as most shooters can fire their pistols.

The student will also be introduced to the shotgun CQB technique, which effectively shortens the weapon by 33%, making it effective even in extremely tight quarters. Other topics include, marksmanship fundamentals, patterning zones, ammunition selection, tactical manipulation and reloads, equipment selection, low light considerations, malfunction clearances, pistol transitions, pivots/turns, and shooting on the move.

Students can expect to leave the class with a much higher understanding of the Shotgun’s capabilities and increased skill level with this weapon system.

After the morning safety brief and rundown, we jumped right into the meat of the training with a demo on the push/pull method of recoil control. Each new skill was demonstrated and then practiced. We started with single shots and progressed into double, triple and eventually 5 quick shot groups, all while focusing on our newly learned push/pull technique. Next we worked on target transitions and revisiting previously engaged targets (just in case a shot of 00 buck to the chest and face wasn’t enough to deter the threat). 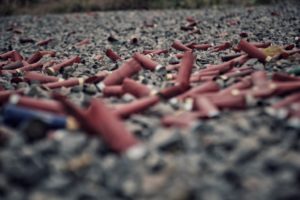 Throughout the day, usually during our shooting breaks (even with the push/pull method, it is exhausting to shoot 12 gauge all day long) the class discussed various equipment topics ranging from stocks, to the best ways to carry additional shells to preferred sighting systems. Sometimes these discussions stemmed from student’s questions and sometimes they were a more formal lecture type presentation.

The last 2 hours or so of the day we worked on reloads. Initially we worked on emergency reloads and getting an additional shot ready and sent down range as quickly as possible. Then we worked on the various options as far as when and where to “top up” our shotguns. Various methods (in position and out of position), various philosophies as to when it would be appropriate to top up etc. etc. were discussed and practiced. 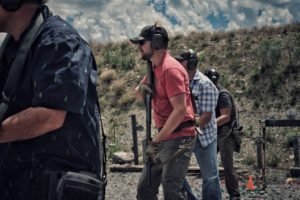 Day 2 kicked off with a quick review of the skills learned and practiced on day 1. After brushing off the dust and waking up a bit more, we transitioned into more elaborate movements while shooting. Adding to the simple forward and back movements practiced on day 1, we incorporated turns and pivots before and during the movements.

Day 2 also featured a relatively extensive discussion and demonstration of patterning our individual shotguns and how various types of ammunition might affect the pattern and terminal effects of our shots at various distances. Judging from the group’s reaction and their attentiveness, this was one of the more valuable topics covered during the training.

At the end of the training portion of the class, Rob explained that the shotgun is the easiest of the firearms to maintain proficiency in. He also provided a 25 round practice session designed to practice and maintain the skills that we had developed over the last 2 days. Rob mentioned that he intended to provide a written layout for this drill in the near future as well (see notes under “What can be improved and how?” below).

Day 2 was wrapped up with a friendly head to head elimination type competition that involved multiple targets and a reload. Before beginning the competition, Rob warned that it was rarely the speed of the shooting that won the competition, it was the speed of the reloads. This was perfectly demonstrated by 76 year old Bob who was slower shooting, but much smoother and quicker reloading, when he climbed his way to the top and proceeded to outshoot everyone else in the class. 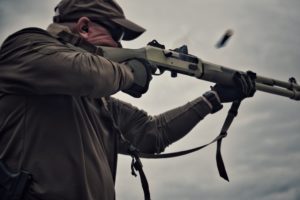 The feedback from participants was overwhelmingly positive. The class was formatted and designed in a way that built the student’s skills and confidence in a logical way. Everyone involved in the class (both teaching and attending) was friendly and helpful.

It is easy to see that Rob’s curriculum has been taught, tested, questioned and refined over the many years he has been teaching it. All 3 instructors were approachable and provided thoughtful answers to all questions asked. The class flowed well over the course of 2 days and was tailored to our group.

“Great, class. Never thought I would enjoy shooting a pump 12 gauge so much”

“This was an excellent class. I learned more about defensive operation of the shotgun in 2 days here than I have in 14 years of LE.”

“The Tactical Shotgun course with Rob Haught was worth every penny. The “Push Pull” technique that Rob teaches is worth the price of admission alone but other techniques that Rob passed on, such as shooting from a “compressed” (CQB) position were outstanding as well. Rob, his son Matt, and longtime buddy Bob Mefford were all fantastic instructors who explained, demonstrated and communicated all of the concepts and techniques extremely well.” 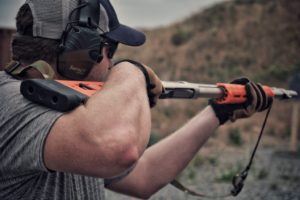 Please don’t take suggestions for improvement as a sign of dissatisfaction. I am a strong believer that the desire, intention and effort to improve is a valuable attribute of any good instructor or student. From our discussions, I believe Rob Haught shares these feelings.  This section will be broken down for clarification into a few subsections based on who is responsible for the action that will lead to the improvement.

This was the first official course I have hosted with Pew Pew Solutions. Overall, I think things went fairly smoothly, but can definitely be improved. Just weeks before we hosted this course, I created this website which improved a lot of things, namely: 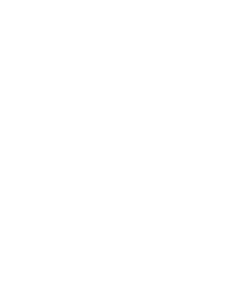 One fairly easy improvement I would like to see from the instructors is some kind of printed outline for the course. We discussed this during day 2 and Rob mentioned that they are working on a few resources that they will be able to supply along with the training in the future. A basic outline of the course skills and topics of discussion will allow the students to retain more of the material presented, especially if notes are taken throughout the course. The course outline could even be formatted in a way to allow note taking by studious attendees.

Another useful improvement would be a little more detailed information and or guidance on the equipment list, based on the instructors recommendations. Several of the students purchased equipment for the class and it would have been beneficial to have slightly more guidance for those of us (ie me) who had very little experience in defensive shotgun shooting.

As students, the participants are just as responsible for their learning as the instructor is. The single thing that stood out the most to me during the class, was the fact that I did not see any students taking notes! There may have been some notes taken, but I didn’t see any. Perhaps this is another area, the organizer and instructors can help in. By making it easy and convenient, we can encourage the students to take notes so they have something to review and help them retain more of what was learned.

“I’ve taken quite a few outstanding firearms courses and Rob’s “Tactical Shotgun” was definitely among the very best.  It was definitely money well-spent.  And Josh from “Pewpewsolutions” did a fantastic job of organizing the training.  He was in constant contact with each of the students and clearly communicated the course objectives, equipment needed, and directions to the range.”

Although shotguns are not the most popular, sexy or “gram worthy” of guns, a weapon is a weapon. The shotgun has its advantages and disadvantages and this training helped me begin to form my own intelligent opinion. Rather than regurgitating what I read someone else say online, I wanted the opportunity to train with and learn how to properly deploy the “hammer of God” as it is referred to.  I enjoyed the training and would recommend it to anyone interested in learning and mastering the techniques needed to effectively deploy a 12 gauge shotgun.

“The course, taught by Rob Haught, with assistants Matt Haught and Bob Mefford, was everything I hoped it would be: safe, serious, and scholarly. I appreciated the course of instruction, starting on a solid platform of basics, and logically building all additional skills on that foundation.”

“To those contemplating taking this Rob Haught course, I have the following advice. Just do it!” 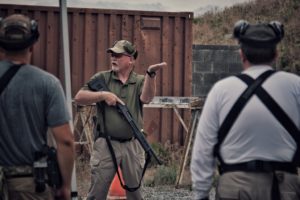 Rob Haught is a veteran law enforcement officer with 30+ years experience as a Patrol Officer, Chief of Police and Chief Deputy Sheriff in West Virginia. Rob is an accomplished competitive shooter with numerous National, Regional and State championships under his belt. Rob is a respected instructor for Federal, State and Local LE agencies. While best known as an innovative tactical shotgun instructor, Rob also offers programs in handgun, submachine gun and carbine and is a consultant to the firearms industry and corporate security.

Most of the high quality images featured in this AAR and photo gallery are courtesy of our buddy, Orlando. You can get in touch and follow him on instagram: @orlandoech 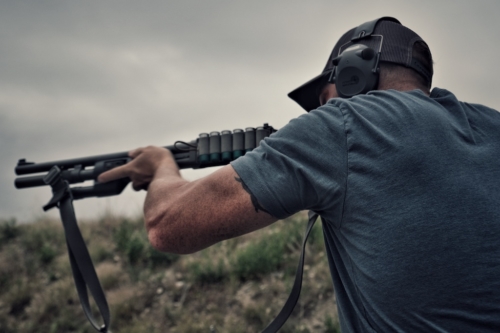 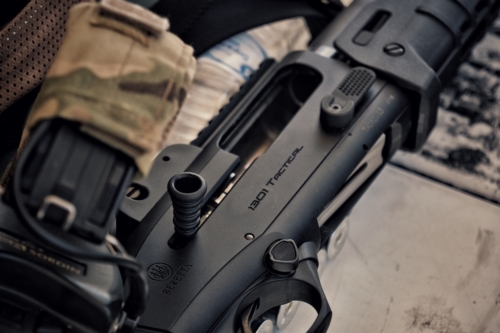 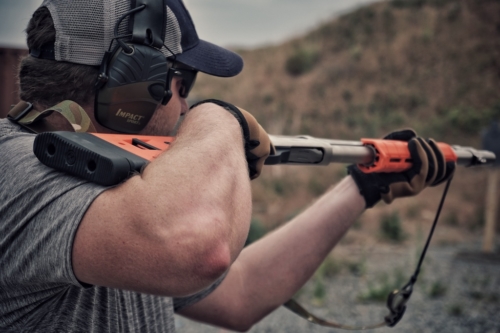 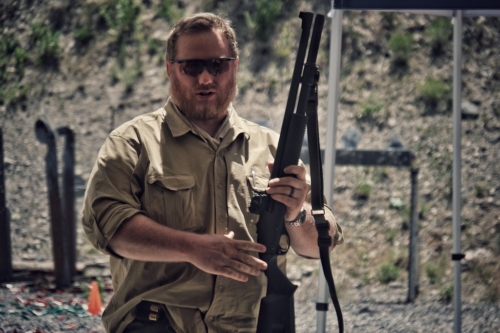 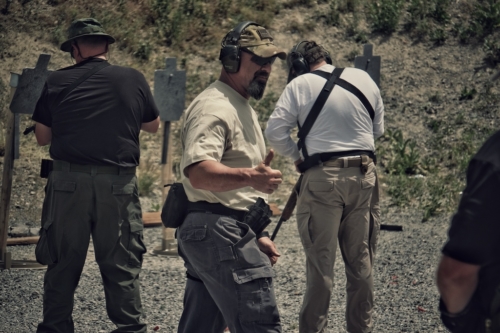 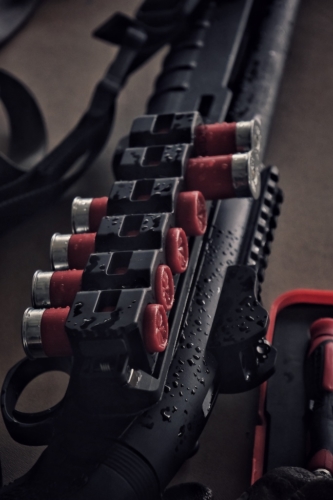 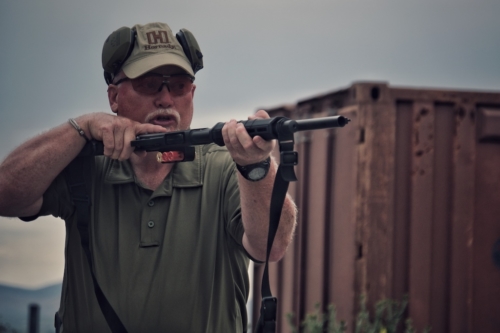 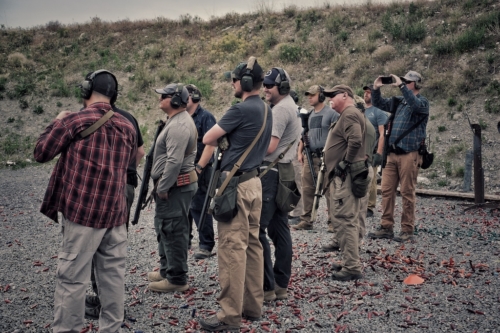 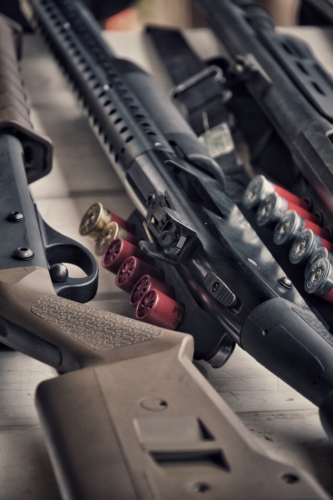 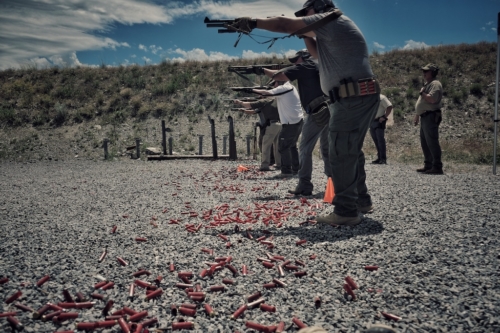 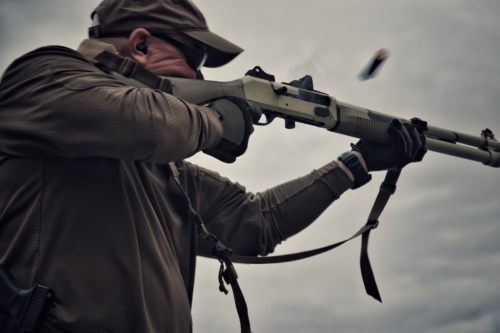 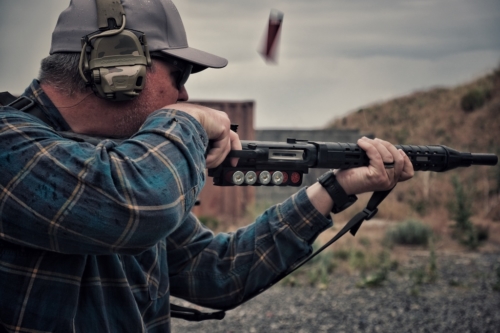 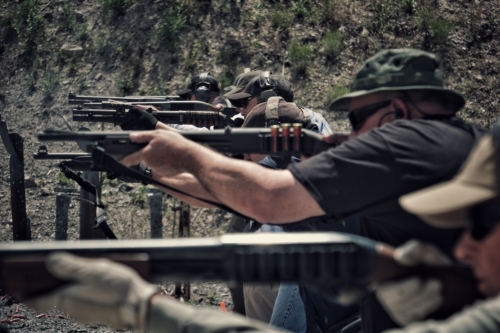 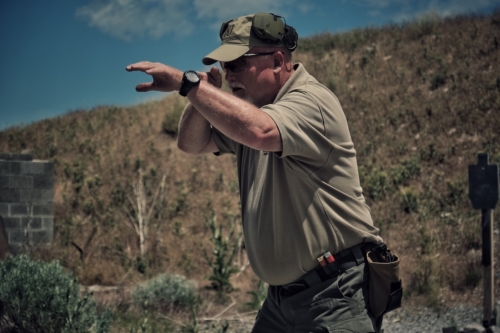 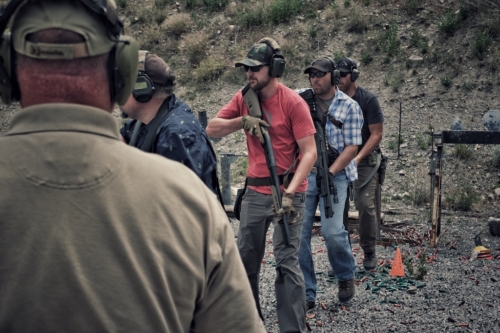 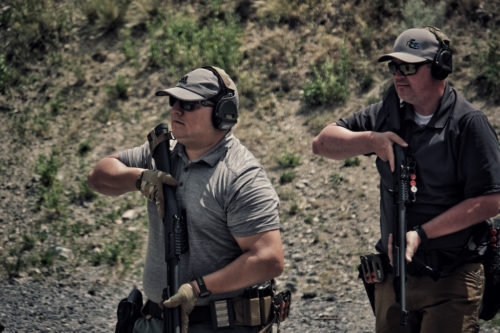 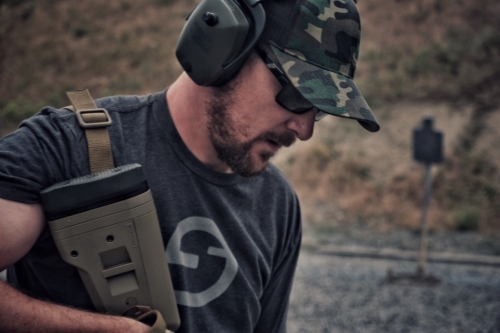 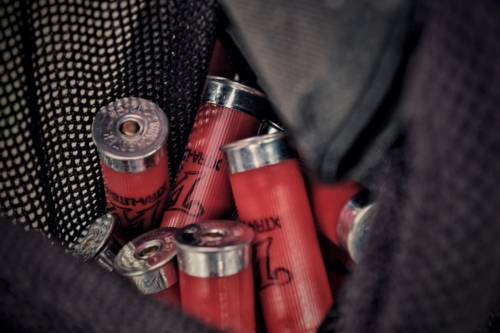 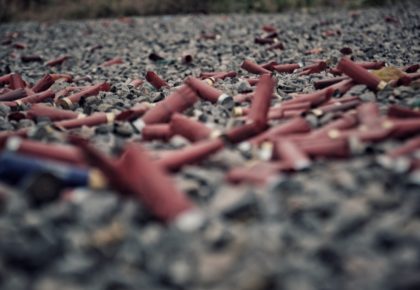 A UT based training group for those passionate about firearms safety, self defense, shooting sports.